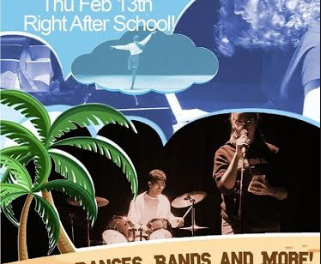 DAA’s 20th Genie awards show was on Thursday (February 13), featuring a senior skit and a talent competition with acts by students from 9th to 12th grade.

First of all, the skit portrayed a competition between some senior high school students where they had to go through different stages of the competition. In the end, the final winner was left to an audience vote which some say was rigged. Audience member Freddy Beck said, “It was amazing. I really liked Samantha’s part. Samantha’s part was top notch.”

Throughout the events in the skit, there were breaks between scenes where the talent would perform. There were fantastic acts including dancing, singing, and playing instruments. There were single and group acts, and overall, it was a great show.

Let’s see what some of the performers thought:

Omar Taha (Solo artist) said, “Before I went onstage, I was extremely nervous, to a point I was uncontrollably trembling. After a week of rehearsals, I had done everything I could to improve my performance. I found myself improvising little accessories that I never rehearsed to impress the audience.”

Sofia Sahdala, lead singer and rhythm guitarist in the band Iridescent said, “It was absolutely exhilarating to perform. With having the support of my bandmates and with the audience being so engaged it made the experience unforgettable.”

Overall, the show was fantastic, and we can’t wait to see what’s in store for next year.

Filipina Delivers Baby on a Dubai Flight to Manila

How will the Coronavirus Affect Thanksgiving in the United States in 2020?