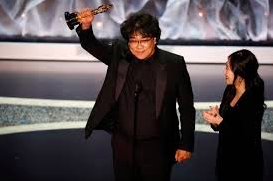 For the first time in the history of the Oscars,  a non-English film has won Best Picture. Writer and director, Kwak Sin-ae and Bong Joon-ho went on stage to accept their first Oscar for Parasite. Parasite also won for Best Foreign Film. Kwak Sin-ae received an award for best original screenplay, while Bong Joon-ho won an Oscar for best director.

Parasite is a movie that shows how people in a desperate need of money will take extreme measures to defraud wealthy people.

Whilst this movie has multiple themes, the main one is how someone can invade your life and reap rewards from your hard work because of the parasitic nature of humans.

Furthermore, it shows contrast in how someone can live in luxury with the help of someone, but once left alone, they struggle. This is why the movie resonates with so many people. We can all relate to a parasite in our life.

This breaks the Academy Awards criticism for being ‘too white’ or ‘too male’ for winning the awards. The hashtag, #OscarsSoWhite is spreading all over social media. Movies like Crazy Rich Asians and Parasite were able to break down that stereotype. The director Bong said he overcame the “one-inch tall barrier of subtitles.” After the Oscars, people have started to think Hollywood is becoming more culturally diverse. The new parasite movie had a big impact on the Oscars, changing people’s point of view.

The South Korean president, Moon Jae, wrote on twitter; “Parasite has moved the hearts of people around the world with a most uniquely Korean story.”

Sweden doesn’t want to lock down!

Positive effects Coronavirus on the Environment