Dubai is a multi-cultural city and 30 percent of this diverse population consists of Indians. It can only be called a shame if you live here and haven’t tried Indian food. If you’re not sure where to go to find the best of this kind, you have come to the right place.

Indian food cannot just be divided into plain Indian. There are 162 languages spoken across India due to the varying cultures across India. India in itself is an extremely diverse nation. Due to that fact, there are many forms of cuisine that make up Indian cuisine as a whole. You can find Mughal, North and South Indian, Buddhist, and many more divisions of this cuisine. The following is a list of the best places you can go to for Indian food.

Amal/Armani is located in the Armani Hotel in the iconic Burj Khalifa. But with an iconic location, comes an iconic price; a dinner for two will approximately cost 1000 dirhams. I mean, what did you expect if the named had ‘Armani’ in it? The venue is modern and has a contemporary look, which does not stay true to Indian culture. I believe that is a downfall, considering that the guests would expect to be somewhat emerged into the Indian culture through the cuisine. At this restaurant, you will have plenty to chose from, but I highly recommend the tasting menu they have as it features a large diversity of the different sub-country cuisines. This will hurt your wallet a little more, but if you really want to experience all of India, this will surely not disappoint you. From the tasting menu, I personally found the Norwegian Salmon Tikka a masterpiece that the chefs at Amal had created. Another great reason why I find this innovative is the fact that it goes beyond the basics to create a Norwegian-Indo fuse. But at a restaurant like Amal, there are plenty other dishes that feature such fusions. 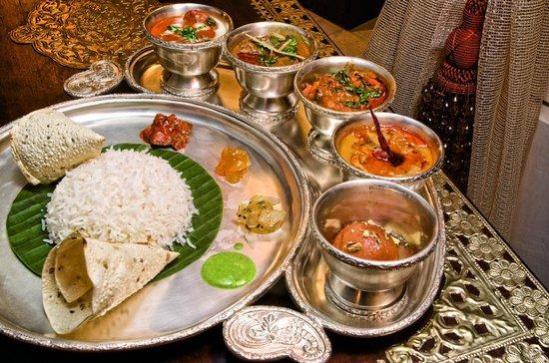 Chutneys is located in the Mövenpick Hotel, Bur Dubai. Chutneys is perhaps the best place you can experience India. You can expect yourself to be treated like royalty, as you will be dining with silver cutlery. The restaurant is never crowded, and in the evening, a band of traditional artists will play some Mughal tunes to let you experience India while being seated. The food is served in a traditional Indian style and the decor is Mughalai. The menu consists of an À la Carte menu as well as a fixed menu, and I would highly recommend going with the fixed one. The fixed menu has vegetarian and non-vegetarian options, and no matter which one you chose, you are guaranteed a taste that you will never forget. The Paneer Butter Masala in the vegetarian option, and the Tawa Murgh in the non-vegetarian option were perhaps the best of their kind, and were definitely the highlight of my culinary adventures.

Indego by Vineet is located in the Grosvenor House Hotel. Indego by Vineet deserves to be named as the best Indian restaurant in Dubai. The design is a fusion of Indian and Western. The “Vineet” in the name refers to Vineet Bhatia, a 3-star Michelin guided chef, which is perhaps the best title one can receive in the culinary world. The restaurant features the highest-end Indian food in Dubai, and what makes it even more special is that the menu options are constantly changing, so if you return, there will be more of Bhatia’s masterpieces available for you to taste. The Kebab platter, Rogan Lamb Shank, and curries are the best things you can find here. However, whatever you order here will leave you speechless and charmed.

The names mentioned above my personal favorites. I have rated them in terms of food and restaurant decor. I have rated the food regarding their appearance, scent, and of course, taste. As a result, I was greatly impressed by Indego by Vineet. In a city like Dubai, there are many more Indian restaurants that serve great food. If you have any in mind, that are not mentioned in the list, please leave a comment!

Australia’s Largest Whale Beaching in Over a Decade

Coronavirus is Killing Around 50,000 People a Week

LA Clippers Shock Elimination from Playoffs after blowing a 3-1 Lead.